Money I Don't Regret Spending on My House

Last September, my fiance, Dan, and I closed on a house near Hyattsville, MD. It’s right next to a new Whole Foods, a Gold’s Gym, and several other fun, new spots. It also cost about $100,000 less than a lot of other houses in the area, because it needed quite a bit of work. I thought it was a great investment to buy a livable fixer-upper in a good location, because we’d spend less on fixing it up than we would if we bought a house that had already been flipped. Plus, it had everything I was looking for in a home: a big front porch, a master suite on its own floor, a finished basement with its own separate entrance, a room for my home office, and pretty big backyard. It’s also about a mile from the metro, so I can walk there or take the bus easily.

We decided to put 10% down for the downpayment so that we’d have money leftover for renovations. That left us with about $30,000 for renovations up front. (If you want more info on how we had this cash on hand, check out my post from last week!) Most of the money we spent right away was a good investment, even though it was painful to write those checks. So here’s what I feel good about investing in:

When we first bought our house, the living room floor was all parquet. When you walked through the living room and into the kitchen, it morphed into large, tan tiles with black grout. That tile continued on into the dining room. I hated everything about those floors. I couldn’t imagine living in a house that was almost entirely parquet and tile. I felt that having the floors redone would instantly make the house feel more like our own. So we hired Empire Today and they tore up the parquet and tile and installed floating hardwood floors. They are a beautiful dark brown and I still love them.

Plus, we knew we wanted to rent out our basement on Airbnb. The floors in the basement were reminiscent of elementary school floors back in the 80s and 90s. They were ugly and dirty. Plus, it turns out that the type of tile used likely had asbestos in it. So we wanted to make sure to update the floors. It’s incredibly expensive to mitigate asbestos, but the floors are safe as long as you don’t drill or nail into them. So we had luxury vinyl flooring put over the floors in the entire basement. It’s easy to clean and looks like gray hardwood. It made the basement look like a whole new space. The whole process for replacing the floors on both levels only took two days.

Fixing Up the Basement

Like I said above, we knew from the beginning that we wanted to rent out our basement. In fact, we were specifically looking for houses with finished basements that had their own entrance. The problem was, the basement was finished, but had not been very well cared for. Everything was pretty filthy and there were some electrical hazards going on.

Not only did we re-do the floors, but we also repainted all of the walls. We got rid of the unsafe electric stove, the oversized refrigerator, and moved the sink to a more appropriate location. We bought the most adorable mini fridge, along with a microwave and electric kettle. Dan and his sister installed the backsplash in the kitchenette. We bought a couch and moved our old TV down there. We also had a door installed in the basement stairwell so that the basement was clearly and securely separated from the rest of our house. This ended up being pretty pricey because we had it done twice. We tried a sliding door first, only to find out that it didn’t block any of the sound from downstairs. We then had it replaced by a solid core door that closed the space completely.

More recently, I noticed that one of the walls in the kitchenette had water damage and early signs of mold. I was a little in denial about it at first, but I eventually got a plumber to come take a look. It turns out, the floor of the shower was cracked and water was leaking into the floors and walls surrounding it. Not good! So for that past week or so, we’ve had a plumber working on completely demolishing and re-installing the shower. It’s costing us a pretty penny, but it’s better than long-term water and mold damage. Plus, now the shower will be done right.

So not only has all of this work helped us to actually earn money back through Airbnb, but now it is a much more pleasant space for us and for our family and friends when they visit. 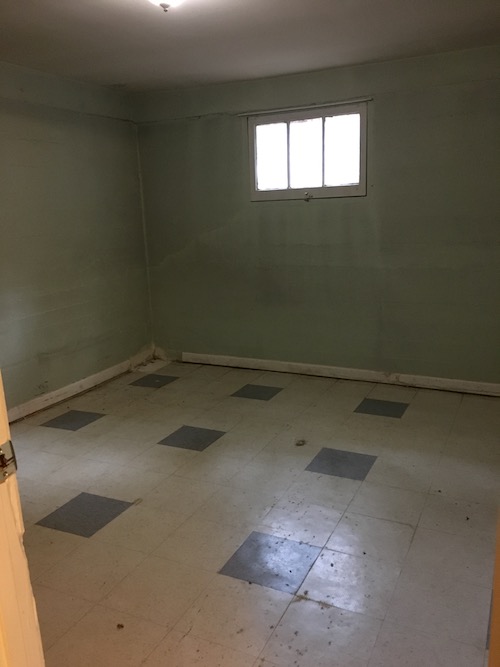 The basement bedroom before we made all our updates. 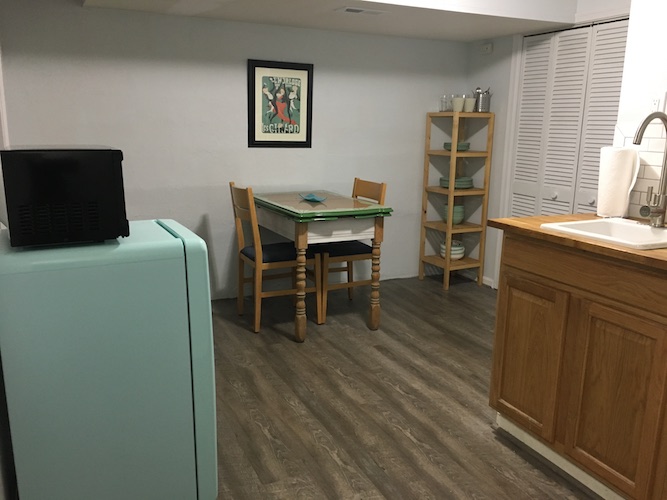 The basement kitchenette after all our updates!

Opening Up the Living Room

When we bought the house, the living room was very narrow. It wasn’t really possible to have a couch facing the television if you put it above the mantle. Plus, the doorway was a double door situation that jutted into the room, and we didn’t think that was necessary at all. We hired contractors (more on them below) to knock down the entryway and move the back wall of the living room out by five feet. The room behind the living room is now my office, but it had been an oversized bedroom. It’s still a pretty big room; almost too big for my home office. Opening up the living room made it much more functional and spacious, without sacrificing the usability of the office. 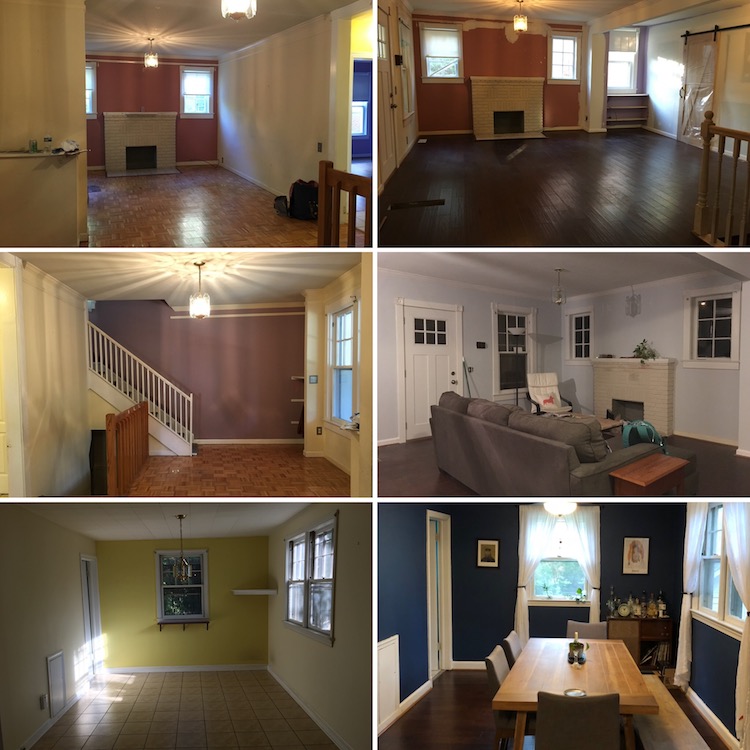 On the left are the before pictures of the living room and dining room. On the right are the after pictures. You can see how we opened up the space and updated the floors.

But, There Were Some Regrets…

Now, don’t get me wrong, I definitely have some regrets. The contractor that we used for the bulk of the work when we first bought the house definitely overcharged us. By the end of that (very long) process, we felt taken advantage of and foolish. We paid way too much to get new counters installed, and they didn’t even check with us before they purchased the counters and new sink. The sink is much smaller than we wanted, but at this point, we don’t want to spend more money on this area. We also had them build and install new hand railings by the stairs, and they did a really hacky job, while refusing to give us a discount that was more than a couple hundred dollars.

I think the main lesson we learned was that we tried to do too much at once. We should have been incremental in our renovations. That would have saved us money and definitely a lot of stress. We were so excited to get everything done at once, and we had (misplaced) trust in our contractor, so we went full speed ahead. If I had to do it over, I would have opened up the living room, redone the floors, and then paused to assess our next steps. We could have been much more discerning in our decisions.

Have you ever been through a home renovation? Share in the comments!

What I Wish I'd Known Before Buying a Home

What to Expect When You're Inspecting